First flown in 1934, the Stearman name changed depending on the nation and military branch flying it. Most common was the PT-17, built for the U.S. Army Air Corps and outfitted with a 220 hp Continental R-670-5 engine. Regardless of name, the plane served as the primary military trainer for a half dozen nations. Its welded steel fuselage allowed the plane to take the punishment of student pilots while the wooden wings and fabric covering reduced costs compared to all metal airplanes. 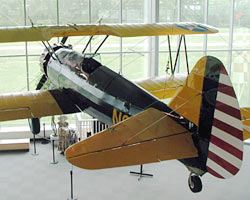 The tandem cockpit design allowed the student to sit in the front cockpit, with the instructor in the back. With the controls linked between the two cockpits, instructor pilots could easily take control of the plane when student pilots faltered.

After World War II, civilian pilots used Stearmans for barnstorming, crop dusters, pulling advertising banners, and more. Stearmans were a common sight at College Park Airport during the Brinckerhoff years, particularly at the air races and as stunt planes.

The Museum's Stearman has an unusual contribution to the history of aviation. In April 2000, Gus McLeod flew this Stearman N8NP for the first open-cockpit flight over the North Pole. McLeod took off from Montgomery Air Park in Gaithersburg, MD, and after 13-days, circled the North Pole on April 17. Unfortunately, mechanical problems forced him to abandon the Stearman on an ice floe. A month later, he returned to find that N8NP had drifted about 80 miles from where he had left it. The repaired airplane and McLeod flew as far as Alert, Nunavut, Canada before the weather prohibited further flight. With help from the National Air and Space Museum, New York Air National Guard, U.S. Air Force, and U.S. Navy, N8NP was finally brought back to Maryland. Gus McLeod flew the plane one last time at the 2000 College Park Air Fair before donating it to the College Park Aviation Museum.

Note: according to Jane's; PT-17 specifications vary from source to source
/QuickLinks.aspx