In early 1911, the Army Aviation School purchased 2 Wright B aeroplanes for the College Park Airfield and designated them Signal Corps Number 3 and Number 4. These planes were very similar to the 1909 Wright Military Flyer (Signal Corps Number 1) but show the slow evolution of early aviation. One change was the relocation of the elevator from the front to the rear of the aeroplane. This improved the pilot's ability to control pitch (up-down), but the structure also increased drag and made the plane prone to stall (lose lift). 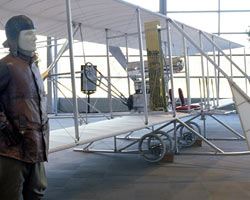 Wheels were added to the undercarriage of the plane, so the plane could take off without aide from a rail. A more powerful engine helped the Model B generate the power needed to takeoff. Earlier Wright airplanes used a tower-and-weight-drop catapult to launch the craft.

The Model B was equipped with dual controls. The pilot operated the elevator control in the left seat with his left hand while with his right hand he operated the rudder and wing-warping control, located between the two pilots. This arrangement was reversed for the pilot in the right seat, resulting in what was referred to as right - and left-seat pilots. This problem was corrected in 1912 with the installation of an additional rudder/wing-warping control lever, giving both seats identical controls.

The Museum's Wright Model B reproduction was constructed by Ken Hyde and others at the Virginia Aviation and Machine Company of Warrenton, Virginia. It was built to the standards of the original, using the same materials, construction techniques, and finishes as those employed by Orville and Wilbur Wright. The only exceptions are a non-operating engine and the covering of a balloon cotton fabric as opposed to the original rubberized fabric.